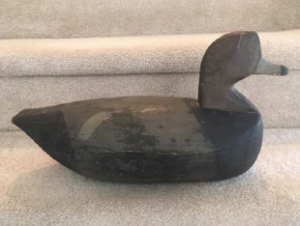 Joe Perry was the foremost waterman in the family. Joe had three brothers, Colon, Marvin & Richard, who hunted together. Only Joe made the decoys and repaired them. In the 1920’s and 30’s, the Perry’s hunting camp and cabin was located in Kitty Hawk, NC at the end of Poor Ridge Landing. This camp is where they kept their hunting boats and decoys.

Joe’s brother, Colon, worked for Edward Knight, the owner of The Whalehead Club in Corolla, NC. Joe’s decoys were chopped out with a hatchet and finished with a spoke shave and draw knife.