A History Lesson: The Spanish Flu 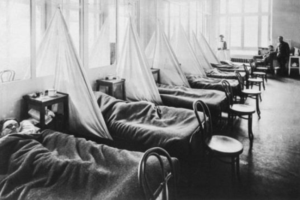 This is not the first pandemic that the Historic deWitt Cottage has seen in its 125 year history.  Just over 102 years ago the deWitt family had to endure the Spanish Flu Pandemic of 1918.  The children, all ten of them, were living with their widowed mother, Cecile.  Cornelius, their father had died suddenly (age 53) 5 years earlier while on a business trip to Minnesota.  As the pandemic was just beginning, the United States and its allies were desperately trying to put an end to World War I.  The Spanish flu pandemic of 1918, the deadliest in history, infected an estimated 500 million people worldwide—about one-third of the planet’s population—and killed an estimated 50 million to 100 million victims, including some 675,000 Americans.

All eleven members of the deWitt family were able to survive these horrific statistics associated with this pandemic.

The following is from an article by Rebecca Grant | Fox News Spanish flu, like coronavirus, wasn’t really a single national crisis. It was a set of hundreds of crises that played out differently in major cities, towns, states and Army and Navy World War I training camps.

Pittsburgh reeled. Indianapolis coped well. New York City, with a 1918 population of more than 4.7 million, was twice as big as Chicago in those days but kept its flu mortality rate in check. Franklin Delano Roosevelt, Douglas MacArthur and Robert
Frost all caught Spanish flu. Americans in 1918 were facing a “silent foe” and a wild trajectory of new cases, just like we are. The Spanish flu strain is not the same as the coronavirus. But you’ll recognize the drastic measures taken back then.

The 1918 Spanish flu also tells us what to expect next. Right now, America is watching coronavirus cases multiply and praying for the curve to bend. Health officials in 1918 were looking for that same big indicator.

Sadly, in Philadelphia, the response was not so complete. Flu deaths at the Philadelphia Naval Yard began Sept. 7, 1918. Still, officials let 200,000 assemble for a Liberty Loan parade and war bond drive on Sept. 28, 1918. By the time Philadelphia banned public gatherings, it was too late. The city was burdened with additional war workers and could not keep up. Daily flu deaths in Philadelphia passed 500 on Oct. 6 and reached 837 on Oct. 12, on the way to a total near 13,000 in that wave.

Worst off was Pittsburgh, where wartime steel and munitions production made officials reluctant to shut down and isolate. Pittsburgh didn’t confront the epidemic in time. As a result, Pittsburgh recorded one of America’s highest mortality rates at 1,243 deaths per 100,000 in 1918, according to a 2007 study from the St. Louis Federal Reserve.

Shutting down Army and Navy training camps was out of the question and the Spanish flu ravaged them in the fall of 1918. As with cities, the danger zone typically lasted for about four weeks before abating. One Army camp in Illinois held 40,000 men and registered 10,713 cases with 1,060 deaths – all this among a young cohort.

Then there was Wisconsin – the only state to enact aggressive, statewide measures, according to historian Steven Burg.  Wisconsin State Health Officer Dr. Cornelius A. Harper closed everything down on Oct. 10, 2018. True, Wisconsin by then knew of the decimation back East. But fast steps kept flu escalation lower in Milwaukee, where City Health Commissioner Dr. George C. Ruhland roped in businessmen and doctors to set policy that even won over Socialist Mayor Daniel Hoan.

The 1918 Spanish flu also tells us what to expect next. Right now, America is watching coronavirus cases multiply and praying for the curve to bend. Health officials in 1918 were looking for that same big indicator: the plateau and decline in new Spanish flu cases. When it came, they reopened fast, with Chicago back to normal operations by Nov. 4.  Astonishingly, the economic impact of the Spanish flu closures was sharp but didn’t last. From looking at the Dow you’d never know anyone was sick. The Dow Jones Industrial Average rose from (don’t laugh) 74 in January 1918 to stay above 80 all during 1918 with only routine volatility.

You bet small businesses like those saloons and theaters suffered. Economic data for 1918 is patchy, but the St. Louis Federal Reserve study found retail and entertainment hard hit, with Midwest stores losing 40 percent to 70 percent of their business during the fall flu peak. Mattress and bedsprings sales soared, though.

Of course, that 1918 economy didn’t have airlines, fast-food restaurants, casinos, giant pension plans and integrated global supply chains. The pain here in 2020 is real. Still, the business lesson of the 1918 Spanish flu, if there is one, was that several weeks of public closures didn’t do lasting macroeconomic damage.