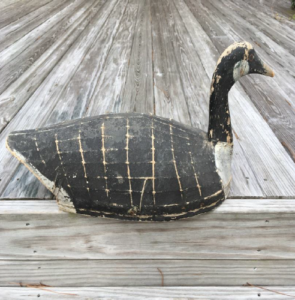 Son of a market hunter, Constantine “Stant” White. Clarence was the youngest of fifteen children.

In 1959 Clarence built a house on Knotts Island at the end of Brumley Road near his hunting area.
​
In 1943 Clarence made a stand of geese decoys that perfected a unique construction technique. Using a two-piece head that was joined by mortise & tenon.  This joint strengthened the head and bill and is widely recognized today. Clarence White canvas geese are very collectible.

The classic split-tail curlew sold for $390,000 on November 8, 2006, establishing a record price paid at auction not only for Nathan Cobb, but also for a Virginia decoy.

​NOTE: As a result of the October 1896 severe storm and destruction to Cobb’s Island, Nathan F. Cobb’s grave was removed from Cobb’s Island in 1897, and reinterred in the same cemetery as his son, Albert F. Cobb (1836-1890): Cape Charles Cemetery, Cape Charles, Northampton Co., VA.