A few words about Alice Walsh By Jim Mehne

Alice was a special person. Most of you who knew and worked with Alice on various committees understand what I mean by that statement. She was a force of nature; she was a force to be reckoned with! To say she was highly organized would be a gross understatement. She championed the cause of the Guild and she championed the cause of the museum. Alice devoted 110% effort to everything she did. She approached every job with a keen focus on the objective and determination to succeed. She was active in a number of other pursuits in which I was not personally involved.

Alice was very proud of her children and especially fond of her grandchildren. She knew which ones I had met at one time or another and would regularly share a good story about them when appropriate. Alice was a school teacher and would regularly tell funny stories about the early years. I am sure she was a kind, compassionate, and devoted teacher. I smile when I think back to parent – teacher conferences where I was the subject of heated conversation. I’ll bet a parent- teacher conference with Alice Walsh was an event to be remembered. I wish I had just one teacher like Alice!

​I honestly cannot recall Alice speaking harshly about anyone.

Well, she was not overly impressed by several politicians, but other than that she was always quick with praise. I once asked her son Russell about growing up under Alice’s watchful eye. I think he said she was pretty understanding in most areas but she did not cut either of her sons much slack in the school – work department. I do not recall his exact words but I remember we laughed together about it. 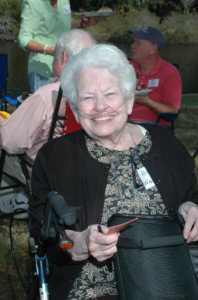 I believe Alice enjoyed the hunt for collectible decoys just as much as her husband Bill. Frequently, while visiting in their home, a particular decoy would become the subject of conversation. Alice would revel in the detail of the circumstances surrounding its acquisition, the location of the auction, and the opposing bidders. Although Alice did not worry too much over lost bids I can assure you she derived great satisfaction from each successful bid. Bill and Alice traveled extensively and visited many interesting and scenic places in search of treasured decoys. She also enjoyed that aspect of the search.

Alice loved her dogs. She enjoyed recounting humorous stories about dogs past and present. I never heard her complain about muddy footprints, at least not from the dogs. Once upon a time I was privileged to be asked to feed her dogs while she was out of town. To be entrusted with the care of her dogs was a high honor I did not take lightly. I remember when one of her favorites died I carved a Bufflehead decoy in remembrance. She held that decoy in her lap and cried. I sat beside her and
suffered right along with her. I recall later telling Russell I would never do that again. Did I mention Alice loved her dogs?

When I think of Alice I always think about food. Whenever Alice heard my wife was out of town she would invite me to eat with them in their home or perhaps in a restaurant. When Bill and I would embark on a road trip we always left with a huge  bag of candy, cookies and sometimes a few sandwiches. I also recall a Board meeting at the Walsh residence where platters of food and snacks were passed around the room. That was Alice. She cared, she was a special person, and she was my friend. I value that most of all.

Link here to The Pilot Online