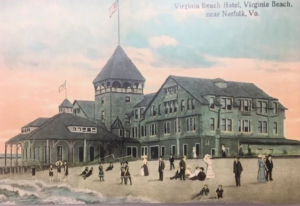 IT WAS APRIL 1914 and Bernard P. Holland, in his second term as mayor of Virginia Beach, was fighting to save the site of the Princess Anne Hotel -destroyed by fire seven years before -from being chopped into lots and sold for cottages.

From a 2010 story by Paul Clancy for Virginian-Pilot

But Norfolk Southern Railroad Co. was on the brink of receivership and couldn’t wait any longer for a hotel deal to come through.· The company, a distant relative of the present Norfolk Southern Railway, had absorbed another line that ran trains to the Beach, built the hotel and sold land for cottages. Holland had worked for the railroad as superintendent, selling land for development, but now the shoe was on the other foot.

“It would be disastrous to us as well as
to the company,” Holland wrote to  company President C. H. Hix. “The hotel and the Pavilion have been the sole inducement to the investors who make the Beach their homes and to businesses here.”

The letters are part of a collection of Holland’s papers that have been given to the Princess Anne County/Virginia Beach Historical Society, in the care of Virginia Wesleyan College, by Ann Holland, his granddaughter. They provide a rare glimpse into the personal and business dealings of Holland, a former railroad superintendent who became the first mayor of the small town of Virginia Beach in· 1906. He served two years, then returned for another term in 1913. 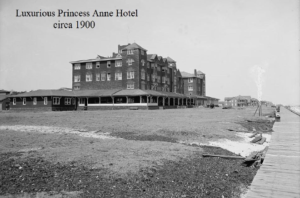 When he first came to the Beach in the mid-1880s one of Holland’s papers says, there was just one cottage and a partly built hotel, the luxurious Virginia Beach Hotel, later the Princess Anne, would soon open, attracting the rich, famous and powerful. Holland was in the thick of it, selling off lots for the railroad. The papers include deeds he signed on property along Atlantic Avenue, including 1,200 acres north of Rudee Inlet for $125,000.

One deed is for an “Infant Sanatorium. There’s an 1893 train schedule (leave Virginia Beach 7:30 am, arrive Norfolk 8:20 am.), and a brochure for the Princess Anne touting “the most beautiful beach on the Atlantic Ocean, a site of about 1600 acres, one thousand of which is covered by a primeval pine forest, many of whose trees are more than a century old.”There’s a list .of property owners that includes Barton Myers, a prominent Norfolk businessman and former mayor. There’s also the 1 909 deed of sale for Holland’s own commodious cottage on 12th Street to Cecile Amelie and Cornelius de Witt. The de Witt Cottage remained in that family for decades until it became the Atlantic Wildfowl Heritage Museum. 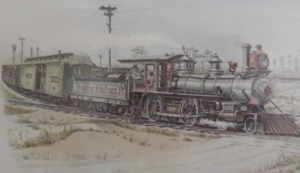 After retiring from the railroad, Holland became a shop keeper, telegraph operator, and postmaster. He also rented out a portion of his store for the town’s first library. For history buffs, there are minutes of a 1903property owners’ meeting that included B.P.  Holland and C. de Witt. The sense of the meeting was they wanted to “incorporate Virginia Beach as a town.” A committee was appointed to draft a charter permitting the town to levy taxes, lay out streets, make bylaws, and provide for fines and penalties and “imprisonment for violators thereof.”

There’s even a yellowed Norfolk Landmark newspaper clipping with the headline, “May incorporate resort as a town.” This, of course, came to pass and eventually the tiny beach town became a city that swallowed Princess Anne County whole.

The loss of the hotel would be a huge setback for the  new town. Holland urged the Norfolk Chamber of  Commerce to step in, then tried to gather a group of  residents to buy the land and hold it for a “first class  hotel.” But he couldn’t pull it off. There are letters  from a real estate company pressing for a decision,  and finally one from Norfolk Southern’s Hix regretting that “on account of our financial condition we could  not see our way clear to accede!

Stephen S. Mansfield, archivist for Virginia Wesleyan, said the Holland papers fill several gaps in the historical record of the resort city, they also show “the eclectic nature of his influence and interests. He really did personify the Beach back then and provided a bridge between the railroad and the community that came about.”