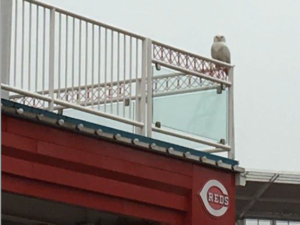 A snowy owl has been spotted in northern Ohio this winter.

Does that mean Cincinnati could see them locally? The chances are pretty good.

Cleveland MetroParks said a snowy owl was sighted Monday in Mecca Township, north of Youngstown and East of Cleveland.

“This snowy owl, found yesterday at Mosquito Lake in Mecca, is the first ‘snowy’ to be found this winter in Ohio. We’re on high alert for Cleveland’s first snowy owl of Winter 2019/2020,” the parks department said.  Dan Marsh, director of education at the Cincinnati Zoo & Botanical Garden, previously told The Enquirer that the possibility of seeing snowy owls in Greater Cincinnati depends on how things are going up north.

“They could push down here easily. It’s not that uncommon, really,” he said. We’ve had run-ins with the raptors before.  Early in 2018, a snowy owl delighted bird enthusiasts in Cincinnati and Northern Kentucky when it visited Cincinnati’s Great American Ball Park. In late 2017, a snowy owl visiting Cincinnati’s Queensgate train yard was critically injured.  The owl’s appearance this far south tends to be cyclical and food driven, Marsh said. The primary diet of snowy owls is lemmings. When food is less abundant, snowy owls, mostly juveniles, travel south to feed. “They are just trying to stay alive,” he said. “They are not looking to make a territory here,” Marsh said. “As soon as they can, they will go back.”

The unique look of the Snowy Owl means that this species is never confused with any other. It is the only one featuring an all white coloring. They also have speckles on the body that are dark gray or black in color. The size of the speckles as well as the pattern of them can be very different for each of them. The females seem to have more of the markings and in a different coloring.

The fact that the Snowy Owl is the only species with this white coloring gives the impression that it is due to the evolution process. At some point in time this species of owl ended up in the very cold regions. In order to survive it had to develop thicker feathers than other species. It also needed a coloring that wouldn’t stand out in the surroundings. Other species of owls are brown and grey but that would be to evident against the snowy background. 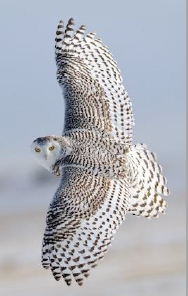 ​There are fossils out there dating millions of years ago that indicate owl species have been around since that time. However, it isn’t fully understood how they are linked to the Snowy Owl. The remains that have been found don’t show that this species was around back then. Yet they may have been and we just haven’t found those remains yet.

As a result there is an ongoing debate among experts about how the life for the Snowy Owls began. Were they the result of another species that moved into that colder region for some reason? Instead of dying out though some of them were able to evolve, survive, and to reproduce?