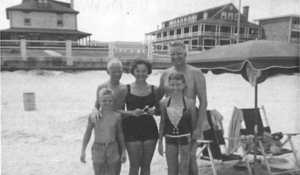 From the archives of the Atlantic Wildfowl Heritage Museum, The Virginian –Pilot, Find a Grave.com, and Past editions of The Wildfowler.

As we begin the celebration of our historic home for the museum, we will be taking a journey into the past with a series of articles that explain how the Atlantic Wildfowl Heritage Museum found its way into the deWitt Cottage.

For those who knew the de Witt Cottage or even had chance encounters with the de Witt family, the impression left was everlasting, and you came away with something incredibly special. This specialness was not just what was said, who you were with or what you saw it was the picture in its entirety.
“Wittenzand”, or the de Witt Cottage, captures something holistic and venerable. 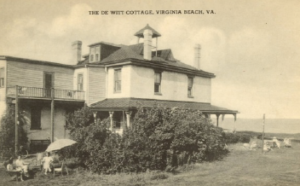 When at the Cottage, you enjoyed each other’s company. simple pleasures, geniality, there were no feelings of wanting to “get away from it all,” only an openness of enjoying one another. Even now when you look at the Cottage it’s the house, the gardens, with the ocean so near: it all seems to reflect back to the life created, gentle, kind, lost in time, ancestral.

Indeed, when you were there, everything seemed to reach out to you, the house and the people. The cupola, the porch that wrapped the house on three sides, and the wide hallways, where summer breezes flowed

Miss Hity could be found lovingly tending the gardens.  It was the one place we tread with what approached reverence. The flowers were every color, size, and shape imaginable, the scents were redolent. The tremendous fig tree was as bonding as the house, ancient, withstanding many a northeastern storm. Boughs that stretched up, then turned up and seemingly clung to the earth. Giving the impression of being heaven sent and well-grounded at the same time. And the figs were like no others. 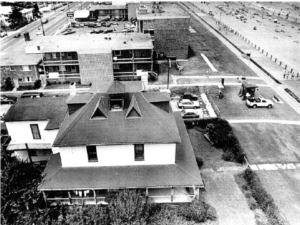 It was all about having fun and sharing thoughts. The company was grand. It was a custom over a 50 year period (1924-1974) for a person to sign in the pig books. They were titled “some pigs who have eaten at Wittenzand.” In over a dozen books, blindfolded friends drew a pig before signing their autographs.

Remembering a stay at the cottage harkens back to a time when conversation and playing games was the essence. You were simply always drawn into part of something. For young and old, there was the treasure trove of comic books, stacked on shelves in a closet that stretched from the floor to the ceiling. The best was picking your favorite reading matter and curling up in one of the ham-mocks in the comer of the porch.

Many was the time we freely roamed the house thinking the sisters knew not where we were. The attic was full of old objects that filled our heads with intrigue and fantasies. And on rare occasions Miss Elizabeth, Miss Ju Ju (Julia) or Miss Katrine would take us up to the cupola, and there the view was expansive – the world was ours – it is the way the sisters always made you feel.  The Burnside Children –
Mike, Chris, Diane Burnside Murdock 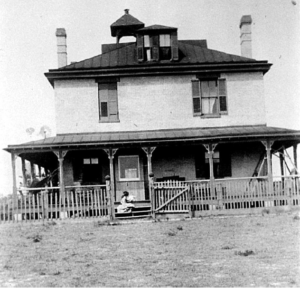 May 27, 1992
​
I’m enclosing a contribution for the de Witt Cot-tage Project. Friends have sent me news clippings and a flier on this interesting restoration. My late husband Gibson Dailey and I spent a number of happy summer vacations there 1936-39. Please give my warm regards to Caroline and Peter and to Louisa Kyle.
Cordially,